I Can F*ck With Eddie Butler

I’m currently sitting on my ass watching the Cubs mow through an underwhelming Miami Marlins team and I can’t help but think Eddie Butler aint too fuckin shabby. Sure, the 14 walks in 24 innings aren’t doing my opinion of him any favors. And neither is the .871 OPS against left handed hitters. But overall I like to think Eddie Butler is earning the right to later lose his starting spot and I find that remarkably encouraging. Stay with me here.

Right now, no one really cares about Eddie Butler. No one’s losing sleep over whether or not he makes it throughout the season in the starting rotation. Maybe his mom. Probably his old man. Definitely his significant other. But outside of that, it’s  e x t r e m e l y  limited. Eddie Butler essentially exists in our collective universe because he has to. Brett Anderson’s a glass house, Monty’s too filthy to leave the pen and honest-to-god that’s it. That’s the starting pitching depth.

So we got Eddie.

Now before I continue, obviously… and I mean OBVIOUSLY… we know there will be a move for starting pitching come mid-July. Slam dunk kinda stuff. And when it happens, it’s going to likely force Arrieta, Lackey and Hendricks down a spot in the rotation to make way for Theo’s acquisition. (Let’s speculate!) UNTIL THEN, someone needs to pitch in the 5th spot, which brings us back to Eddie and I’m sure you can start to understand why no one really cares about him. Poor Eddie.

But all is not yet lost for Eddie Butler. Not yet at least…. not on the heels of another hey this guy doesn’t suck all that bad outing against the Marlins. Not when he’s allowed 2 earned runs or less in 4 of his 5 starts. Not with the 23rd best GB/FB rate amongst NL starting pitchers. (Kyle Hendricks is 24th for reference.) And CERTAINLY not when Eddie Butler is recording (this is absolutely absurd and I love that I get to be the one to share it with you) the 3rd best infield popup rate in the NL at 21.4%. For those of you that want a larger sample size, Eddie also induced infield popups at a 27% clip in AAA prior to his 2017 MLB debut. For context, league average is around 7-8% with Lester coming in dead last at 1.6%. So there’s encouragement that not only are guys hitting it on the ground, they’re also getting jammed, which speaks more to the horizontal movement Eddie gets on his sinker than the actual, you know, sink.

Peripherals aside, I like that Butler pitches off his fastball at a 63% rate. I like that because it tells me he wants to come right at hitters. (Again, for reference, Hendricks is around 70% with the fastball, Arrieta at 58% and Lackey 52%.) I also like it because Eddie doesn’t have swing-and-miss stuff… the fastball has good velo but he doesn’t hide the ball in his delivery that well while his offspeed can be described as aggressive and average… so instead of trying to pitch hitters into two strike counts like a solid 75-80% of his contemporaries, Butler’s more aggressive early in the count to get weak contact. At least that’s what I’ve interpreted.

I also like the arm side run on his changeups to lefties AND righties (rare!). I like that he can break a bat in the upper part of the strike zone. And I like that 3-2 changeup (balls!) to Joey Pancakes Panik there on 3-2 in a semi-tough spot.

On the critical side, Eddie doesn’t load up on his back leg that much. That kind of matters because it hurts his tempo and command so let’s talk about it.

Doc Halladay used to pinch his nuts with his front knee to exaggerate “loading up” on his back leg (basically means getting into position to throw the piss out of the ball):

I know Doc’s in slow motion, but you can sincerely tell that he’s get better tempo and pacing while Eddie’s delivery can be described comparatively as violent. A lot of that can be directed back to when Doc completes his load in his delivery, otherwise known as when he starts to break his hands to go to the plate. That’s when he’s “loaded up” on back the leg and let there be no doubt, Doc’s ready to fuckin go once he gets loaded up. His delivery is efficient, patient and controlled. As a result, he can maximize his command. In fact, this GIF could very well be from Doc’s 2010 or 2011 season where he paced MLB with a league best 1.1 and 1.3 BB/9 respectively. Motherfucker had some command and control.

I’m not saying it’s the key to Eddie becoming a superstar. I’m just saying that he has the tendency to rush through his delivery, which impedes his tempo and pacing, which impedes command. This is on display in the gif above where there’s a 94 mph fastball that Montero wanted inside on Mac Williamson, a career Mendoza guy. Like I said, it’s nice that Butler can break bats at the top of the zone but at the same time that’s Mac Williamson and that dude fucking sucks. Giancarlo hits that ball to Mars. That’s a classic example of where a lack of tempo due to a rushed delivery due to not getting a good load can really hurt you. I’ve seen it a thousand times.

Big loads aside, Eddie’s showing improvement each and every start. He pumps a lively 95. He’s aggressive. His name’s Eddie. Tons of stuff to love about the guy. Hopefully he makes the most out of his opportunity before he inevitably gets upstaged before emerging as an All Star in 2018. That would be soooo Theo. 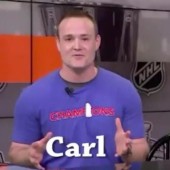 Kris Bryant Blows His Ankle Out Catching Routine Pop Out

Is The Bullpen Dancing Cool?